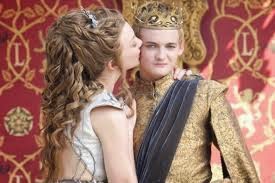 "killing a man at a wedding? horrid. what sort of monster would do such a thing?" - Lady Olenna

this episode, we spent a majority of our time in king's landing, especially during the second half. our time there mostly served to set up some new dynamics moving forward, including jaime's attempt to use his left hand, tyrion's extremely harsh rejection of shae, prince oberyn's veiled threats against tywin/cersei, a brief discussion between lady olenna and tywin about debt, and the eagerly awaited death of the beloved king, escape of sansa and subsequent arrest of tyrion.

we also caught up with stannis/melisandre on dragonstone burning some people (including the queen's own brother) for believing in the 'seven' (gods that is). we got a little backstory, including melisandre's poor upbringing and spent some time with shireen, stannis' daughter.

bran got warned about warging too much. my mom used to tell me if i ate too much chicken, i'd become a chicken. i think it works something like that. bran is now getting visions beneath the weirwood tree of dragons in king's landing and other freaky shit.

the most interesting (and yes, i am the only one who seems interested in this) storyline happened at the dreadfort (a new location this year), the seat of house bolton. we get more evidence of ramsay snow's brutality as he hunts down a poor village girl for sport. but for a house that's sigil is the flayed man and is headed by a man who just killed robb stark at a wedding, roose bolton certainly shows a lot of disdain for ramsay's treatment of theon (aka reek). roose's plan becomes all the more clear in this episode as he tells ramsay that they must take back the north from the greyjoys in order to stake his claim as the new warden of the north.

GAME OF THRONES POWER RANKINGS:
1. tywin lannister (last week, 1) - the war of the five kings may be over, but now his own grandson is the 3rd king to die. maybe joffrey's death should affect his standing, until we consider who is next in line to take the throne.
2. daenerys targaryen (last week, 3) - we didn't catch up with her this week, but after joffrey's death, dany's relative strength can only grow. it's like having a bye week in football and still moving up the standings when everyone else loses.
3. melisandre (last week, 5) - as i wrote last week referencing a scene last year when she burned three leeches representing the 3 false kings (renly was already dead). robb stark, dead. joffrey, dead. i forget who the other leech was for, but i'm sure whoever it is will be fine.
4. bran stark (last year, 9) - the theme here is that it's good to have special gifts... like being able to go into the mind of a direwolf (or birth dragons or demon babies) and seeing into the future. remember that bran (and rickon) dreamed of his father's death and now more visions.
5. tommen baratheon (last week, NR)- it's good to be next in line to be the king. this is just speculation but if ned stark and stannis taught us anything, it's that without any legitimate sons, the oldest brother is next in line to take the throne. plus there's a new actor playing tommen this year.
6. roose bolton (last week, 7) - he will be the warden of the north if he can take it from the greyjoys.
7. oberyn "red viper" martell (last week, hon. mention) - if you can stand face-to-face with tywin spewing not-so-veiled threats then you belong on this list. oberyn pretty much told cersei that her daughter myrcella is a hostage in dorne so yea, he's got some leverage here.
8. margaery tyrell/lady olenna (last week, 4) - well, margaery was ranked #4 last week, but that was before her bread ticket died (for the 2nd time!!). now, we don't know where things stand for her. but with lady olenna at her side, i doubt she'll fall too far.
9. mance rayder (last week, 6) - king beyond the wall. with all these kings dying off, he better be careful.
10. petyr baelish (last week - 10) - where is this new lord of the vale? i doubt we've heard the last of him.

as much as this episode was about joffrey's death, it was equally about the interactions between a lot of the various cast members at the wedding event of the season! cersei and brienne; tywin and oberyn; olenna and sansa. now that most of the characters are making their way home (except those starks), we are being rewarded with a lot of interactions we haven't had in awhile. even jon and sam are back at castle black together. stannis and family are hanging at dragonstone. bolton, new wife and bastard son are at the dreadfort. and the entire lannister family is celebrating in one place.

i appreciate any comments or feedback to help structure these posts for next season. you can write to me at nohyperboleallowed@gmail.com, or via twitter @hyperboleNOT, or on our wall on facebook at facebook.com/nohyperboleallowed, or just write something in the comments section below.
Posted by richmin3000 at Tuesday, April 15, 2014 5 comments

Email ThisBlogThis!Share to TwitterShare to FacebookShare to Pinterest
Labels: game of thrones, tv 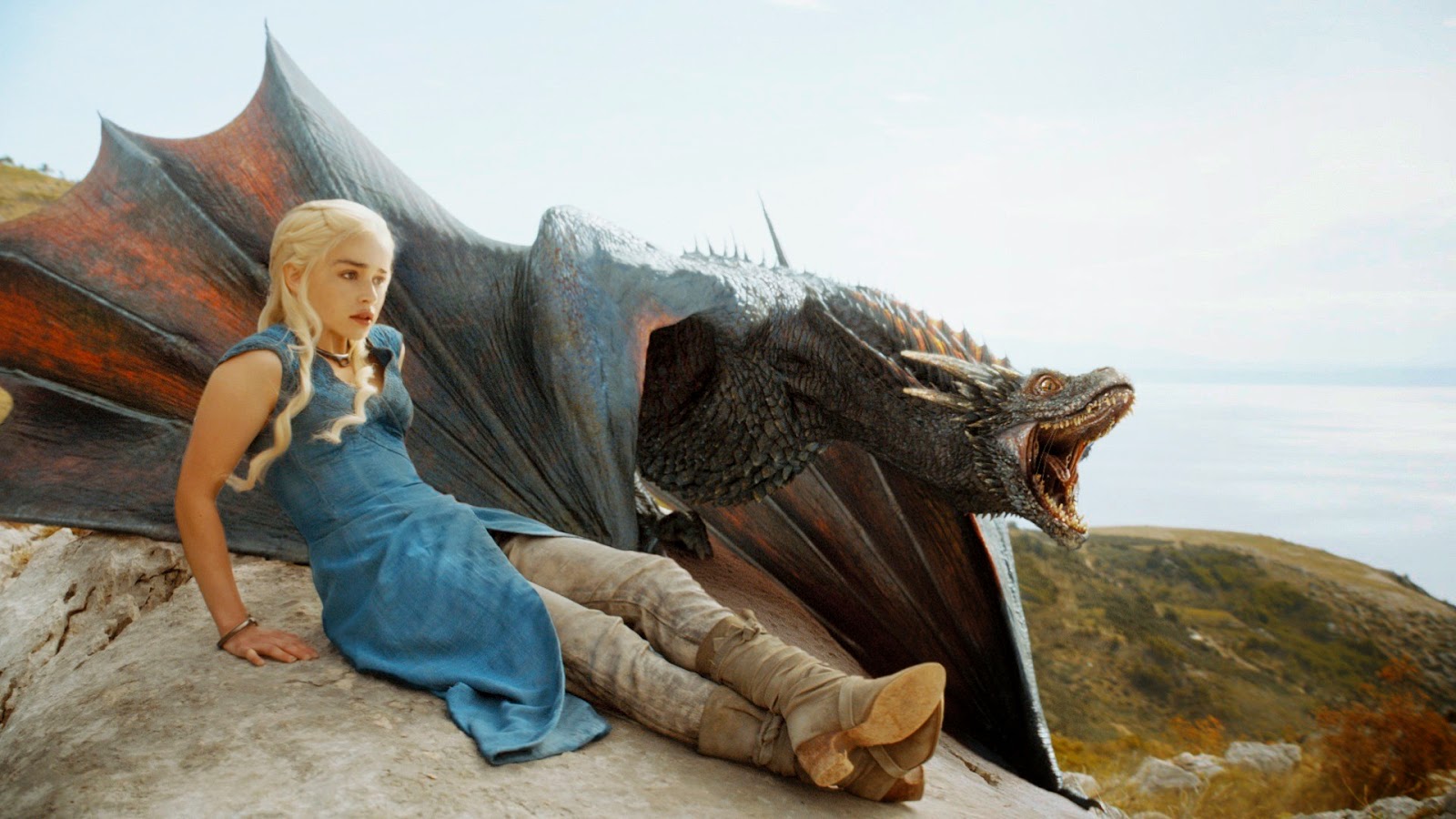 "i grew up in king's landing." - maester aemon (targaryen)

as i stated last year, i changed the format of these recap/reviews to make it easier for me to keep up with the writing and perhaps easier for everyone to follow. last year we went through the different houses, but this year we will go with power rankings.

GAME OF THRONES POWER RANKINGS:
1. tywin lannister (last year, 1) - the war of the five kings is over and tywin celebrates by melting down ned stark's old sword, "ice" into two swords (hence the title of the episode!), one as a gift for his newly returned son, jaime.
2. joffrey baratheon (last year, 4)- it's good to be the king. joffrey seems quite content after the failures of stannis and robb to take his throne. he has no problem talking shit to his uncle/father/captain of his kingsguard as he prepares for his upcoming nuptials to margaery tyrell.
3. daenerys targaryen (last year, 2) - went from almost dying in the desert to messiah for all the slaves in essos (lands across the narrow sea)... plus bigger dragons!! maybe her dragons being too big for her britches takes her down a notch. plus, she still seems far away from the action in king's landing.
4. margaery tyrell (last year, 3) - went from a sexless marriage to being the influential wife-to-be of an actual king... she wants to be the queen. lady olenna, margaery's grandmother, certainly deserves a nod here as well.
5. melisandre (last year, 5) - like margaery above, she's got the ear of a king and knows how to use what her mother gave to her.. like a lady. plus she burned three leeches and robb stark, the usurper, died. i forget who the other two leeches were for, but i'm sure it wasn't important.
6. mance rayder (last year, 8) - king beyond the wall.. he has an enormous army that really wants to get south. we didn't see him this episode, but we did meet the thenns, a clan of wildling warriors, who the other wildlings are even afraid of.
7. roose bolton (last year, 6) - went from extra on the set to warden of the north and all he had to do was backstab his king and let loose his crazy bastard son.
8. bran stark (last year, 7) - i know i know, there's no way a stark can be on this list, let alone a stark who can't walk. but let's be real.. dany has dragons, melisandre has demon babies, but bran not only has a direwolf but is able to mind control it along with a man-giant whose only verbal ability is to say 'hodor' in comical fashion. this kid is legit.
9. petyr baelish - went from lord of harrenhall (which never really materialized) to lord of the vale.
10. sam tarwell - he's the first person to kill a whitewalker in a thousand years.


off the list:  lord commander mormont; robb stark; catelyn stark; theon greyjoy; jamie lannister (sans right hand) and the rest of the lannister children whilst tywin is in charge


no hyperbole allowed rating: A-

i appreciate any comments or feedback to help structure these posts for next season. you can write to me at nohyperboleallowed@gmail.com, or via twitter @hyperboleNOT, or on our wall on facebook at facebook.com/nohyperboleallowed, or just write something in the comments section below.

- so much to look forward to this year.
- howland reed? i've read some theories about him. they sound promising
- joffre...cough cough cough
- oberyn makes such a big entrance, alas, his quest for vengeance is short lived.
- moon door!
- coldhands!
- stoneheart!
Posted by richmin3000 at Monday, April 07, 2014 1 comments

Email ThisBlogThis!Share to TwitterShare to FacebookShare to Pinterest
Labels: game of thrones, tv

as we embark on a new season of game of thrones, it's probably a good idea to spend a few (25)minutes recapping what happened in season 3 just in case you forgot where arya, tyrion, cersei, jon, dany and the rest were at the end of last season.


don't forget that i'll be reviewing every episode this year using our new power rankings format!

Editor's notes: Jim obviously spent a lot of time on this and I have to assume it was cathartic for him to type it all out. I thank him for contributing to the blog. Incidentally, one of my facebook pet peeves is when people complain about what others post on facebook. If you don't like it, just hide it or ignore it! Also, Jim has chicken for dinner every night, so no one is wondering about that. Lastly, liking your own posts is the coolest! Especially when you're hilarious and you know it. #yougogirl
Posted by Colin at Thursday, March 20, 2014 4 comments