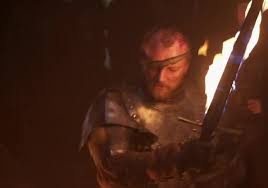 "by what right does the wolf judge the lion?..... my name's jaime" - jaime lannister

"I was told you were drunk, impertinent and thoroughly debauched. You can imagine my disappointment at finding nothing but a browbeaten bookkeeper." - lady olenna to tyrion

last week was mostly about plot development while this week we spent a lot of time in character development. jaime, stannis, robb and jon all had to question their roles in the world in light of ever changing circumstances. the choices they make will undoubtedly have serious consequences for the men they will become and the fate of those around them.

house stark of winterfell
no bran or rickon this week.

sansa tells littlefinger she might want to stay in king's landing after all. i don't think littlefinger likes the idea of the tyrells and lannisters trying to take his girl away from him.

arya is still with the brotherhood without banners on her way to riverrun to meet with her brother. gendry chooses to stay behind and join the brotherhood.

jon's loyalties continue to be tested by the wildlings as they approach the wall. and not by just tormund giantsbane but by ygritte as well. at least her tests have less of a chance to end in death, but alas it is game of thrones so all bets are off. either way, he has either abandoned his nights watch oath or has lived up to it by following what qhorin halfhand instructed him to do. this highlights one of the main themes of this episode and the show in general, which is one of loyalties and oaths... specifically, what choices do people make when their loyalties are conflicted and tested... more on this with jaime later.

as jon finds a little grey in the question of oaths, robb thinks in mostly black and white. like he assumes his father would, he beheads lord karstark after the murder of two lannister boys. it ends up costing him half his army when the karstark men abandon him but at least he has his honor right? and a new plan it seems, which is to recruit the help of the freys and take casterly rock, home of the lannisters.

house lannister of casterly rock
no joffrey this week

tyrion has another slow week highlighted by two great scenes, one with his family and one with lady olenna.

jaime tells brienne the story of how he got his nickname and thus the man who once threw a boy out a tower window has become a sympathetic, misunderstood. the complexity of jaime's nature is really well translated from the book. he also had good short scenes with roose bolton and former maester qyburn.

house tyrell of highgarden
it's a battle between lady olenna, tywin lannister, tyrion lannister and dragons for best scene stealer in this show.

house greyjoy of the iron islands
no theon et al this week.

house baratheon of storms end (now dragonstone)
we get to finally meet stannis' crazy wife and sickly daughter, shireen, this week. this is definitely a different side of stannis, who, up until now, came across as completely rigid and overly moralistic. he admits to his affair with the red woman to his wife who gives him her blessing. stannis' daughter is kept away in a dungeon-like room presumably because she's sick with a disease called greyscale, which makes her skin turn into grey scales. shireen goes to visit davos, the onion knight, in the real dungeons.

house targaryen of dragonstone
dany is en route to yunkai (we only know this because it's a new destination on the map) with her new army. she has them choose their own leader, a man named grey worm. her two confidants, barristan selmy and jorah mormont rub each other the wrong way a little bit. jorah tries to find out of barristan knows about his double dealing ways back in season 1 when barristan had the ear of king robert and may have been privy to secrets. it seems that selmy knows nothing about it. barristan, however, does know that jorah is a disgraced former slave trader with a bad reputation in westeros and suggests he take a back seat. jorah politely declines.

night's watch
no news after the death of lord commander mormont.

brotherhood without banners
beric dondarrion faces off against the hound with his firey sword. (where else have we seen swords on fire? if you said on dragonstone when stannis took the oath of the lord of light, you would be right). though the hound is afraid of fire, he's still able to prevail against beric killing him in the process. except that thoros of myr, the red priest, is able to bring him back to life, for the 6th time they say. that's an interesting development. if this was a game of gods show, the lord of light would certainly be winning. the seven would be second and the tree faces would be a distant third.


no hyperbole allowed rating:  A-
although we didn't have nearly as many jump-out-of-your-seat moments this week, this episode was probably the best yet in terms of style and structure. no scene changes felt rushed or out of place as they have in previous episodes as they bounced around from riverrun to dragonstone to yunkai and to king's landing. the world finally felt a little bit smaller and perhaps that's because the various storylines are starting to relate to each other and to the past as well.

robb's beheading bring us back to ned stark in the show's premiere episode. jon's storyline resonates a lot stronger since the death of lord commander mormont. jorah's brief treachery against dany in season 1 has the potential to come back to haunt him. the tyrells and lannisters seem to be on the verge of all-out political warfare. arya seems awfully close to reconnecting with her mom and brother.

i can't believe that the show is already half-way done and yet we have so much farther to go before season 3 is in the books (so to speak). i'll be taking next week off to travel but will be back after episode 7 to recap both episodes 6 and 7.

i'm excited to guide us through season 3 of game of thrones so would appreciate any comments or feedback to help structure these posts as we move forward. you can write to me at nohyperboleallowed@gmail.com, or via twitter @hyperboleNOT, or on our wall on facebook at facebook.com/nohyperboleallowed, or just write something in the comments section below.

- there's been a lot of talk about where this season will end, especially about catelyn's storyline. i think they'll save that for next year. i'm also curious to see how the writers will convince the viewers that robb has figured out a way to save his own ass by marrying edmure tully to one of the freys. at this point i think everyone believes robb is up shit's creek without a paddle so if the red wedding is going to have the super shocking effect i hope it does, the writers will need to rehabilitate robb at least a bit in the coming episodes.
- i'm also excited to see arya and the hound together but it's going to be awful to see her get so close to her family only to have them die.
- i think that shay is not going to like tyrion's engagement to sansa which i presume will prompt her betrayal or maybe it won't be a betrayal at all and tywin will just apply the pressure as he always does. either way, tyrion should get more screen time soon though maybe not till season 4.
- jon, the wildlings and ygritte are about to climb the wall, which will make for another great storyline that ends with death and disappointment.