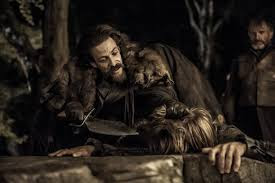 "Maybe you were as good as people said, once. Or maybe people just love to overpraise a famous name" - Brienne of Tarth to Jaime Lannister

finally things have really started to move in episode 3. we've checked in with all the old characters so we only have to look forward from here on out. we added a new piece on the map in riverrun, home to catelyn stark's family, the tullys, and along with that, a couple of new faces. deals were struck, wars are being planned and hot pie is being left behind. a lot to discuss...

house stark of winterfell
robb and catelyn are in riverrun for the funeral of hoster tully, catelyn's father and lord of riverrun. we meet edmure, her brother and new lord of riverrun, and brynden aka blackfish, her paternal uncle and as his name suggest, the black sheep (fish) of his family. robb, and the north by extension, seem to have little patience these days as a run of victories still have left them with little to show for it except mills.

arya and gendry are off with the brotherhood without banners and the hound to who knows where. not with hot pie though who has decided to stay behind to bake wolf bread. hard to tell if arya is truly a prisoner or a guest as thoros of myr suggests. fyi: arya asked the hound if he recalled the inn they were at... it's the same inn where he killed the baker's boy in season 1 after she struck joffrey... and yes, that seems ages ago.

jon snow and the wildling lot have stumbled upon a lot of dead horses at the fist of the first men. they learn that a few hundred night's watchmen are now running around as zombies. with the knowledge that their defenses are low, mance rayder plans an attack on the wall. jon's old friend, sam, reunites with gilly who just gave birth to a baby boy (whitewalker's favorite!).

no sansa, bran or rickon this week.

house tully of riverrun
edmure (fyi: the actor played brutus on hbo's incredible show, 'rome') tully is catelyn's brother and the new lord of riverrun. but his ineptitude (on display after failing to light his father's boat on fire with his arrow) highlights the sudden perilous position the northerners find themselves in.

if you recall in season 1, the mountain (the hound's brother) was ravaging riverrun on the orders of tywin lannister. in this episode, edmure talks about how he was able to drive the mountain away only to robb's dismay. robb had a grand plan to trap the mountain which edmure inadvertantly ruined by not trusting in his orders. these interactions between robb and edmure highlight the fact that they are young leaders that neither command the same respect as their fathers.

the blackfish is catelyn's uncle and seems to be one of those grumpy vets who have no patience for the incompetence of the young. he's a great character in book 3 and the casting seems perfect. the show does a great job at giving us a sense of several character's nature in short, visual bursts. the introduction of these two characters and riverrun on the map of westeros should clue everyone into its importance in season 3.

house lannister of casterly rock
besides the musical chairs with tywin, cersei, tyrion and the rest of the small council, there was no real movement for tywin, cersei and no appearance by king joffrey.

tyrion is named the new master of coin after tywin announces that littlefinger will marry lysa arryn (catelyn's sister) and become the new lord of the eyrie. it was also mentioned that roose bolton (robb's bannerman) holds harrenhall which was supposed to be littlefinger's.

jamie's storyline was the highlight of this week obviously with him getting the ned stark treatment, only it's his hand that's gotten chopped off and not his head. after his capture by bolton men (stark bannermen) he had a lot of great character moments with brienne and his captors, exposing his lazy reliance on his family name, quick wits and physical gifts. jaime though has come a long way from pushing bran out of a tower window to saving brienne's honor in this past episode. jaime's character is well explained by his choice in life to forego his legal claim to the riches of casterly rock (as described by tyrion earlier this year) and join the mad king arys targaryen's kingsguard. he's a man who has always struggled with his identity, his family name and the ease in which he's coasted through life. now he's a man whose greatest skill has just been taken away from him. i can't wait to see how that will affect his character's story arc.

house tyrell of highgarden
no appearances by the tyrell clan.

house greyjoy of the iron islands
theon was released from his torture device by someone who says he's theon's sister's man only to be hunted down by those who were torturing him only to then again be saved by the same man who helped him escape in the first place. not sure what's going on exactly but i have a pretty good feeling we'll find out soon enough (and i have my own assumptions which i'll explain in the spoiler section down below).

house baratheon of storms end (now dragonstone)
the red woman is off to run some errands and king stannis seems ornery about it all.

house targaryen of dragonstone
dany agrees to purchase all of the unsullied soldiers in exchange for one of her dragons over the fierce objections of both of her consigliere. up until that point, jorah mormont and barristan selmy seemed to be at odds over every other issue. jorah, himself a former slave trader (which caused him to be banished by ned stark) has advised dany to buy the unsullied while barristan has advised her that a slave army will not give her the loyalty she needs to win.

no hyperbole allowed rating:  A-
this was a big character development episode. i think we are starting to see some holes in the northern leadership, particular with experience and decision making. the lannisters for all their strength and money aren't the tightest family around. dany is struggling with the idea of buying slaves after her quiet stroll down the walk of punishment. jon will have to choose how far he's willing to go in order to prove his worth to the wildlings... will he attack the wall with his new brothers? theon is learning quickly that strength lies in honor, family or purpose, of which he has none.

i'm excited to guide us through season 3 of game of thrones so would appreciate any comments or feedback to help structure these posts as we move forward. you can write to me at nohyperboleallowed@gmail.com, or via twitter @hyperboleNOT, or on our wall on facebook at facebook.com/nohyperboleallowed, or just write something in the comments section below.

- the first thing i want to discuss is theon's storyline which i think, after two slightly confusing (bc his storyline was only told as recollections in book 5 and not told in the present in book 3) episodes, has cleared itself up.  i have to assume that the person who helped him escape and later saved him is really ramsay bolton, roose's bastard son, who was supposed to rescue winterfell and was obviously the one who burned it to the ground. the main clue is that when he shot a guy with the arrow he called him "bastard" both a fact and insult. i am very interested in finding out how they resolve this storyline and expose his identity to the audience.
- a longer term spoiler so i will keep it short - tyrion's mention of the bank that has lent king's landing all that money... they always get paid one way or another.
- edmure and robb seem destined for great things together...
- i think next week we'll see the planned union between tyrion and sansa and soon thereafter, littlefinger's escape with her to the eyrie.
Posted by richmin3000 at Wednesday, April 17, 2013