Review: Game of Thrones ("The Prince of Winterfell") 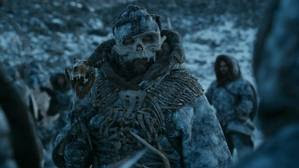 
*my reviews/recaps will not have any spoilers in the main section as they relate to future events but will have many explanations or clarifications of events currently happening on the screen so if you want to figure it out for yourself, read with caution.

this is the calm before the storm episode. as is with hbo tradition, the penultimate (2nd to last) episodes of seasons are typically the most climactic and exciting and i expect no less with next week's (tonite's actually) 9th episode.  there is a battle brewing and i think that the showrunners wanted to save some money setting this up this week, which resulted in a slower-than-usual episode.

king's landing
i wonder what lord tywin would think of his children fighting amongst themselves as the enemy draws ever closer. in retribution for sending her daughter away to safety, cersei decides to imprison the whore, ros, who she mistakenly believes to be tyrion's main squeeze. tyrion is relieved to find that shae is unharmed, but perhaps he'd be best served following cersei's advice to sansa last week about loving none except your own children.

the highlight of our time in king's landing this week was the scene between tyrion, varys and joffrey where joffrey announces his plan to give stannis a red' smile from ear-to-ear. we can only hope he tries. tyrion and varys pronounce their love of the 'game' and it's obvious now that tyrion is the new main character of the show, ned stark 2.0. he's honorable yet not to a fault in this less-than honorable world. he's smart and loyal, even if it's to a family that deserves no such loyalty.

varys also tells tyrion about dany's dragons across the sea. i'm not sure if tyrion's reaction was one of horror, disbelief or nausea.

stannis is 1-day away.


winterfell
as i've continuously said, my favorite storyline in this season has been theon's. he's a great character in the book but in the show, i think they've done a great job exploring his conflicting motivations. this week, he's more than slightly annoyed by his sister's cold reception and small armed reserves. i mean, he specifically told her to bring hundreds of soldiers. i fully expected her to follow his orders completely.

instead, theon's sister yara seems like she's stopping by just for a quick meal before she returns to wherever she's heading. this obviously makes no sense because winterfell is very out of the way from where she was or anywhere she might be going (which one can only assume is close to the sea). she could have just sent a raven. or perhaps she wanted to see her brother face-to-face for one last time, knowing he'd stubbornly refuse to abandon winterfell. it was actually a very warming scene between yara and theon.

we also learn that the stark boys are still alive!! hurrah! hiding out in the family catacombs of all places. genius. truth be told, i completely forgot that they actually hide out there to fool theon. it worked out great though because i was pleasantly surprised to see them down there at the end of the episode.

tywin is on the move. to where i can't say for sure. perhaps to take robb head on (as arya believes) or perhaps to provide support to his children in king's landing against stannis.

arya is also on the move with some help from her friend, jaqen h'ghar, and also a little bit of trickery. a man looks surprised when he hears his own name. arya proves that she just might be capable of playing the game of thrones in light of her ability to forget honor when it comes to getting what she wants. arya is on the move with gendry and hot pie for some more adventures.

not sure when we'll be back at harrenhall, but we leave it in the good hands of sandor clegane aka the mountain, who is charged with finding and killing the 'brotherhood without banners'.


robb stark's camp
catelyn sure is trouble. lucky for her, she happens to be the king's mother. at the end of episode 7, we wondered if she would put an end to jamie's life but we find out in this episode that she freed him and sent him off with brienne, who will most likely try and trade him for the 2 stark girls (though we know that there's only 1 in king's landing).

speaking of brienne and jamie, their storyline didn't really begin until book 3 so i'm not sure how much more we'll get of them this season, but they are incredible together. we've already seen a few great back and forths between the two and it should make for some great dialogue whenever we see them next.

robb is so angry at his mom that he decides to have sex with the really hot nurse. perhaps it was the story about the slave saving her brother that turned him on so much. either way, it finally happened and i was actually drawn to the this storyline. i've read a lot of criticism about robb and talissa (i'm going to start using her name - i was only avoiding it because i always assumed she was lying about her name since they changed it from the book) but i don't get it. i know that robb isn't as sexy a character as jon or dany or as likable as tyrion or jamie, but his storyline is crucial. his storyline is the most honorable and in his storyline, we find hope for a better westeros. otherwise, we are left with nothing but death, betrayal and dragons. ok, fine. the dragons would be great.

beyond the wall
jon jon jon. it sometimes seems that his fate is similar to theon's. they are both pseudo stark kids that have shown themselves to be brave but highly incompetent. i know a lot of you were confused last week as to why qhorin pushed jon down the snow hill. it's because he is trying to play jon against him to ingratiate jon into the wildling group as a mole.

the other boys (sam, et al) find a box full of dragonglass shards. should make for some nice souvenirs.

qarth
this entire dany storyline has taken way too long. there was no point to her 2 minute long scene this week. i know people love dany (as she is currently the leader in our poll - look to the right), but we don't need to check in on her every week if nothing's going to happen.


no hyperbole allowed rating:  B
the weakest episode of the season i would say but like every game of thrones episode thus far, it's still one with many great scenes. next week, we will be sure to get a great one as it's penned by world-creator, george r. r. martin (he writes one episode per season).

- robb's romance with talissa (aka jeyne westerling) is really important for future storylines and i think they've done a great job allowing them time to fall in love. it's really difficult in such a condensed season (only 10 eps compared to the normal 12) to fit in all the various storylines and do them justice, but i'm glad they chose to explore this one in some depth.
- i guess tyrion won't be constructing a long ass underwater fence to trap the baratheon army in blackwater bay.
- having forgotten that the stark boys hide underneath winterfell, i wonder if they will chose to separate them when they finally leave winterfell (i jumped the gun on this last week).
- i forget when sam actually uses the dragonglass. i think it's in book 3 so i won't spoil it but it's AWESOME!
- i really like podrick payne even though he hasn't uttered a word.
-
Posted by richmin3000 at Sunday, May 27, 2012