Review: Game of Thrones ("The Old Gods and the New") 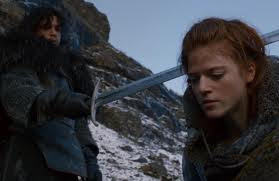 *my reviews/recaps will not have any spoilers in the main section as they relate to future events but will have many explanations or clarifications of events currently happening on the screen so if you want to figure it out for yourself, read with caution.

this was certainly the best episode of the season thus far and it may have something to do with all the people who lost their heads, limbs and other body parts this week.

king's landing
last week i mentioned how well the show had set up the rising tensions within the city walls and this week we saw that tension turn into full on rage. we've had very few chances to see nobility interact with commoners but after sending princess myrcella off to dorne for her safety, the lannisters had to make their way past crowds of common folk. one of those commoners took it upon himself to launch some poop at king joffrey and a melee ensued. a bunch of lannister staffers fell victim to the mob but the rest were rushed off to safety.

during the riot, tyrion continued his complete lack of respect towards the king with a fierce slap and the hound aka sandor clegane showed off his honorable side by saving sansa stark from a quite traumatic raping.

iron island/pyke
theon and yara are off fighting their respective battles so no action on the island this week.


winterfell
this week starting off crazy good but i know it confused some of you as i had to explain it to a friend of mine during the viewing... last week, theon's 2nd in command told him that no one would respect him until he proved himself. knowing that he could never prove himself attacking fishermen, he decided to attack torren's square which is near winterfell. however, that plan was only a ploy to lure the stark men out of winterfell so he could seize the castle as it went unguarded. this was inferred to the audience in a look theon gave last week to his 2nd in command when they first were discussing the plan to attack torren's square. it went by quickly but if you were paying attention it was easy to read.

regardless, this week opens up with theon overtaking winterfell and declaring himself lord of winterfell and prince of the iron islands. he brutally chops off sir rodrick's (backstory: rodrick is the castellan of winterfell and most likely taught theon how to fight which is why he said "i should have never put a sword in your hand") head and forces bran stark to surrender.

osha, the wildling woman, pretends to turn against the starks but just so she can organize an escape for the two stark kids, bran and rickon (who showed up last week so the audience wouldn't forget that he was still a character when he ran off this week with bran), and hodor. off they go.

theon's storyline is easily my favorite this season. his dramatic return to pyke and conflicting loyalties have been written and acted amazingly. when sir rodrick tells him he is truly lost, i could see that theon knew that he was.

stormlands
no stannis this week. no renly either. oh yea, he's dead. no tyrells as well since they returned to highgarden, their homeland.

harrenhall
the scenes between tywin lannister and arya stark are incredible. they really do admire each other and i have a feeling that tywin wishes he had a child like arya while arya admires tywin's grit. too bad they're mortal enemies at heart.

not much in plot development happened here this week but arya did give jaqen h'ghar the name of her 2nd victim in order to save her own behind (1 name left). and petyr baelish arrives attempting to arrange a house tyrell and house lannister mutual accord. we don't know yet whether tywin will go along.

robb stark's camp
not sure how to else to label this besides robb's camp because he's just roaming around trying to kill lannister men. i'm not even sure what his plan is at this point although it seems as though he's pretty confident about it all. however, catelyn stark arrives just in time to see robb flirting with his new love interest, a noble nurse girl from volantis. catelyn reminds robb that he has been promised already to one of lord walder frey's daughters (last season, in order to cross the river and the twins, he agreed to marry). also, robb and catelyn get word from winterfell (i assume the raven maester luwin sent in the first scene of the episode) that theon greyjoy has overtaken the castle. roose bolton, a stark bannerman, convinces robb to let his bastard son retake winterfell for the north.

beyond the wall
jon and qhorin halfhand are heading towards mance rayder when they come across a few wildlings. jon can't find it in himself to kill the cute girl named ygritte, which leads to him getting separated from the rest of the night's watchmen and left alone with the wildling girl. they end up spooning and the wildling girl turns out to be a huge flirt. remember your vows jon.


qarth
daenerys is getting rejected left and right in her quest for ships. and to make matters worse, she loses her dragons. what a bad mother she turned out to be.

no hyperbole allowed rating:  A
this was by far the smoothest episode of the season with seemingly far less jumping around scene-to-scene. they allowed us to enjoy each location and had some great character development. who am i kidding... the gruesomeness this week really was on another level. first, theon needs like 3 attempts and a head kick to decapitate sir rodrick. then, the people of king's landing start tearing lannister men limb from limb.. literally. the hound rips out someone's insides rescuing sansa. osha slits a greyjoy companion's throat during a makeout session. and jaqen h'ghar poison darts a lannister man in the neck. ok, the last one wasn't so gruesome but the death scene was still pretty awesome.

- so the whole storyline in qarth seems to be pretty different than in the book but i like it. i don't fully remember what happens in the book but i don't recall all this drama and the dragons definitely don't get stolen. still, as long as we end up in the house of the undying, i'm cool with it.
- jon and ygritte, sitting in a tree, k i s s i n g. the stark and snow brothers are really turning up the charm these past couple of weeks. don't eat the forbidden apple is all i'm saying.
- jon and qhorin halfhand have great banter. their future scenes together should be quite dramatic and i can't wait to see jon's interactions in the wildling camp.
- i have a huge hatred for catelyn stark who, in new york, would be prosecuted for child neglect and abandonment. arya is long lost. sansa is in hell. rickon is cracking nuts like a maniac and bran is, well, bran is having visions. at least robb is making all the right decisions thus far. (snicker). getting back to catelyn, she is still a great actress and when she finds out that bran and rickon are presumed dead, i can't wait for the waterworks to start.
- i wonder if bran and hodor will split from rickon and osha like in the book. since osha seems to be taking on characteristics of other characters in the book, like those swampy brother and sister, it seems as though they might all travel together. which makes me wonder if rickon, in the book, has any role to play whatsoever.
Posted by richmin3000 at Monday, May 07, 2012