Review: Game of Thrones ("A Man Without Honor") 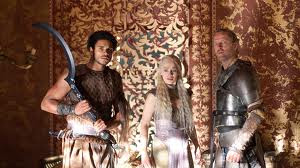 *my reviews/recaps will not have any spoilers in the main section as they relate to future events but will have many explanations or clarifications of events currently happening on the screen so if you want to figure it out for yourself, read with caution.

tywin's great definition of legacy, above, helps us to better understand what drives many of the characters in this show. later on in this episode, cersei will advise sansa that it's better not to love anyone, besides your own children (which she admits is not a choice), as love forces us to make illogical choices, that, in the end, only serve to harm ourselves. such is life in westeros if you choose to play the game of thrones.

there was no joffrey this week but even so, he seemed to be on everyone's mind. after rudely rebuffing sansa's courtesies, the hound leaves her with a reminder that in the future, he will be the only one standing between her and her abusive future husband, king joffrey.

sansa gets one step closer to that brutal future i just mentioned when she finally has her first period. time to make the babies! this leads to a great scene between cersei and sansa where cersei offers her some advice about love and children (see above) which seems to have worked wonders in her case (see below).

cersei and tyrion share a rare moment of sibling affection as cersei regrets the horrible king joffrey has become. as cersei casually admits to having bed jamie (wondering where joffrey got his evil genes from - look in the mirror), tyrion tries to comfort her by acknowledging how sweet her other two children (myrcella and tommen) are.

iron island/pyke
theon and yara are off fighting their respective battles so no action on the island this week.


winterfell
oh theon theon theon. what are we gonna do with you? last week the episode started off with theon's conquest of winterfell. this week, we start of with theon waking up in bed to the realization that he's just been hoodwinked. bran, rickon, osha and hodor are on the lamb with a big bag of walnuts.

theon does his best to try and track down the boys. in the end, he manages to track down two boys... we just don't know if they are bran and rickon. in the aftermath of this latest snafu theon is realizing that there is no middle ground anymore... he's made his bed and has to lay in it. if he wants to be his father's son, he can't show the same sympathies his foster father, ned stark, once showed him.

in the backdrop, there is a race, of sorts, between yara (theon's sister) and ramsay snow (roose bolton's bastard son - roose bolton is robb's bannerman who keeps talking about how there are too many lannister prisoners) to see who's gonna make it to winterfell first. as ned stark once declared, winterfell can hold off an attack with 500 men. it seems that whoever gets there first will be in the position of strength. theon's conquest will become meaningless unless his sister can get there quickly.

stormlands
no stannis this week though we hear from tyrion that he has set sail for king's landing and should be there in four or five days.

harrenhall
again, the scenes between tywin and arya are some of the best this show has ever done. they bring out the best in each other because neither one is able to get the better of the other and they both obviously have respect for one another. the scenes are also a great opportunity to get some exposition and backstory.

this week, we hear about aegon's conquest of westeros 300 years ago. he and his two sisters rode in on the backs of dragons burning down the land, including harrenhall. we also hear tywin send the mountain, gregor clegane, off to burn the surrounding lands in an attempt to figure out who is trying to kill him. hint: probably everyone.

the main suspects are the 'brotherhood without banners'. they are an outlaw group that tywin's men have been apparently having problems with. you're not supposed to know who they are even though they've been mentioned a few times, but i can assure you that the leader of said group appeared in season 1. it's not a spoiler and it's not something you need think about at this point so when it comes up in the future, i will provide a fuller explanation.

robb stark's camp
robb is off to receive some random lord's surrender but i'm sure it's just an excuse to get some quality time with the hot nurse.

we finally get the return of jamie lannister and he does not disappoint. he's such a dick but also so cocky and witty that it's really hard to hate him (unlike joffrey who is annoying and incapable - the lesson being that it's acceptable to be an ass if you can do it well and with some charm). this week, he kills his own cousin, kills lord karstark's son, escapes from prison, gets captured again and tells catelyn stark that he has more honor than her late, cheating husband.

it's obvious that jamie in this captive state can not endure. he's either going to escape or be killed. he's too much trouble just to keep around in chains and robb's bannermen are getting restless.

beyond the wall
jon jon jon. it seems like there are a lot of incapable men this episode though in jon's case, i can sort of empathize. i mean, ygritte is really a master temptress. i don't know how jon held off like he did and in the end he got captured by wildlings. he should have done it while he had the chance. there's nothing worse than dying a virgin in the cold. trust me, i know.

qarth
it was the butler with the frying pan in the library. no no, that's not it. it was mr. ducksauce and warlock dean pelton with the knives in the house of the undying. something like that. not quite but hopefully you get the picture. mr. ducksauce conspires with warlock dean pelton to murder the rest of the 13. what this has to do with dany's dragons is a bit of a mystery since the writers have chosen to completely depart from the book's storyline. my guess is that they have taught the dragons how to multiplicity themselves.

no hyperbole allowed rating:  A-
another great episode as the show moves towards season two's climax. unlike last week's episode, this week featured many fewer deaths and a lot more character development through one-on-one dialogue. cersei and sansa, cersei and tyrion, tywin and arya, jamie and cousin, jon and ygritte. this week featured some of the best writing in either season and it should come as no surprise as the showrunners, db weiss and david benioff, scripted this episode themselves.

-this is barely a spoiler but obviously bran and rickon are not dead as every single one of my friends has already realized. theon would not have felt the need to tar the dead boys unless he was trying to hide their identities. the not-so-obvious effects will be, however, cat's and robb's reactions to the news.
- i'm starting to really worry about the fact that bran and rickon are not separated by now. i'm only through book 4 but i have still not heard one word about rickon since he left winterfell. does this mean that he is truly insignificant or that he and bran will reconnect soon or that, in the show, they've decided to completely change their storylines. this wouldn't surprise me since they've decided to leave out the swamp kids.
- speaking of catelyn, i had to pause this week's episode after cat drew her sword on jamie. i assumed that she would be releasing him but have read reviews that make the assumption that she will cut of his hand in this scene. i don't think that will happen. i'm also starting to realize that the starks lack some strategic intelligence or perhaps they are just too trusting.
- i'm so curious to see what happens with theon in the next couple of episodes and how ramsay snow is portrayed. having not read book 5, i still don't know what happened to theon even though i never assumed he died. i've since learned that he has not.
- i'm also very excited to see jon interact with the wildlings which i was mentioned last week. i'm a big fan of jon's story arc and i wonder if the actor playing him can live up to challenge.
- i know that dany's story isn't that interesting in book 2 but i feel like they've spiced it up for all the wrong reasons on the show. i like warlock dean pelton as much as the next guy but i would have rathered them spend more time on westeros than in qarth in retrospect.
Posted by richmin3000 at Monday, May 14, 2012