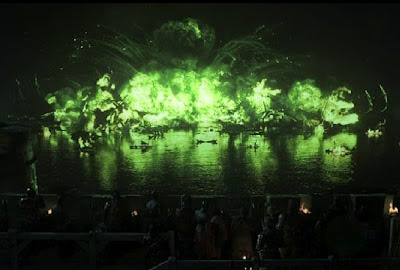 
*my reviews/recaps will not have any spoilers in the main section as they relate to future events but will have many explanations or clarifications of events currently happening on the screen so if you want to figure it out for yourself, read with caution.

last year's penultimate episode was "baelor" (the one where ned loses his head) so thrones had a lot to live up to with sunday nite's "blackwater" penned by author, george r.r. martin. though it mostly succeeded, this latest episode suffered through some of the same problems this 2nd season has in general.

"i'm a lannister. i dont' have a choice in all of this" - tyrion lannister

king's landing
we kept our focus this week in king's landing which was a great decision by the powers-that-be since it's been quite annoying getting superficial check-ins on many of the characters each week (like last week's completely insignificant scene between dany and sir jorah mormont). it would be great if the show could spend more time with each character when their storylines come up even if it is more infrequent.

between season 1 and season 2, the world of game of thrones has grown exponentially. in season 1, we were introduced to the starks, baratheons, lannisters, targaryens, night's watchmen and visited places like winterfell, king's landing, the wall and dothrak. in this season, not only have we added the tyrells and greyjoys, but we've added qarth, pyke, harrenhall, dragonstone, not to mention the great landscape north of the wall. and though we still mostly follow the starks, baratheons and lannisters, their respective families are splintered and on separate paths, which means even more storylines to keep up with.

although this depth of world creation is certainly an impressive feat on paper, it's much harder to accomplish in the medium of television, especially when the books are 800 pages each and presented with each chapter in a different character's point of view. the tv show, on the other hand, consists of 10 50-minute episodes, rather than the full length 12 on hbo (or even 13 back in the day). if this were network tv, we'd be talking about at least 20 42-minute long episodes (like lost).

this creates not problems, but difficult choices. the writers are forced to slash a minor character here, a minor storyline there. in some ways, it actually makes for a more enjoyable viewing experience since many parts of the books spend time world building rather than pursuing action. still though, there are some characters and storylines that are necessary in order to preserve the integrity of the books. and even if we focus solely on the necessary, the show can still feel, at times, overburdened. the writers are forced to remind us each week that dany is still worried about her dragons or that jon is still trying to prove his worth or that catelyn is still trying to keep her family intact and safe. it's almost as if the writers are given a checklist each week and sometimes the scenes feel as though we are running through that checklist.

what keeps the show unique and fascinating though is it's use of dialogue and subtext. the writers often put two or more characters in a setting while they discuss what the status is of their situation or comment on the situation of others. it gives us the writers an opportunity for exposition and the audience an opportunity to discover each character's motivations and personalities.

this week's episode was a microcosm of this entire season thus far. the battle of blackwater bay is a momentous event in 'a clash of kings' and the culmination of a lot of character's story arcs throughout book 2. tyrion spent the entire book using his intelligence and loyalty to the lannister name to protect the gates of king's landing. in the book, he secretly built a long chain link fence that he then laid underwater at the mouth of blackwater bay. when all or most of stannis' ships had passed through the mouth, tyrion raised the fencing behind them to trap them and then proceeded to set all the ships ablaze with wildfire.

on the show, tyrion's plan was much more simplistic but still very smart. he sent one ship unmanned towards the baratheon fleet leaking wildfire along the way until it was too late for anyone to escape. the shot of bronn's arrow flying through the nite sky to set the green fire ablaze was breathtaking.

yet, as soon as the battle started, things started to fall apart within the episode structurally speaking. the first few scenes were great at setting up the tension right before the start of fighting. the women were in maegar's holdfast keeping safe, tyrion and joffrey took their place atop the castle walls. davos seaworth and his son led the baratheon fleet into the calm waters of blackwater bay. it all felt so tense. we were given an opportunity to let it all sink in. once the fighting started, however, it felt more like we had to get through the checklist once again.

stannis charges foward. check. the hound leads the ground defenses. check. the hound gets scared by fire and retreats. check. tyrion leads the counter-assualt. check. podrick payne saves tyrion's life from an attack by a kingsguard knight. check. more baratheon men storm the castle. check. tywin and the tyrells save the day. check.

obviously i'm exaggerating and the scenes between cersei and sansa and later on, with cersei and her son, tommen, provided much needed emotional depth. but it doesn't help that the battle sequence looked like it took place on a 50 yard field in front of one (of many, i assume) particular gate (yes, the mud gate which tyrion predicted last week. though only so that hbo could save money by not having the battle take place over several different locations). just to get back to an earlier point. one main reason the show is only 10 episodes is because hbo can't really afford (loose use of the term) to make more episodes. it is already the most expensive show on tv. that's also the reason we don't get more battle scenes (even though we don't get a lot in the book either) and why, in this episode, the battle takes place in front of a lone gate.

don't get me wrong. this episode was money well spent, but it would be foolish not to look at the financial restrictions in place when talking about this episode's structural faults. if hbo had a limitless budget, we'd probably be talking about at least 13 episodes and the battle of blackwater bay would probably take up 2 of those episodes; the first of which could end with tyrion getting slashed in the face fading to black. we would spend the second episode dealing with lord tywin and loras tyrell's late heroics which seemed quite rushed and very confusing here. all of a sudden, a host of men started charging forward. besides one shot of the lannister banner in crimson red, there was no way of telling whether they were on stannis' side or the lannister's side. then all of a sudden tywin rushes into the throne room to inform cersei that they were victorious.

the battle of blackwater bay is the climax of this season because at the end of the day, everyone is fighting over the iron throne which is in king's landing, not in winterfell, not beyond the wall and certainly not in qarth. yet, even with a fully dedicated episode, the battle seemed rushed and not as epic as i would have hoped.


no hyperbole allowed rating:  B+
though i spend a great deal criticizing some of the show's limitations, there were a lot of great moments from this episode as there always are. my criticisms are almost always about the rushed plot developments but rarely do i criticize the moments with each character as they contemplate their positions in life. cersei with the grand maester receiving the poison. sansa leading the noble women in a hymn. the hound talking about a world built by killers. tyrion fully realizing his potential as a leader of men. these are the things that make this show great.

- i wonder if dany found her dragons yet?
- i was really curious to see how they were going to deal with tyrion's battle wound, which, of course, was much more graphic in the book. i assumed it would be impossible or at least impracticable to have his entire nose removed but a gash on his cheek seems a bit light.
- i can't wait to see cersei get all the credit next week for saving king's landing instead of tyrion. the days of tyrion's reign as hand are sadly over.
- not many more spoilers i can add since we're close to the end of book 2 and anything else i'd have to add would spoil events that are dealt with in book 3.
- i did read online that the swamp kids will be cast for season 3 so i'm pretty sure that bran will have some new companions moving forward. i am very excited for that.
Posted by richmin3000 at Thursday, May 31, 2012