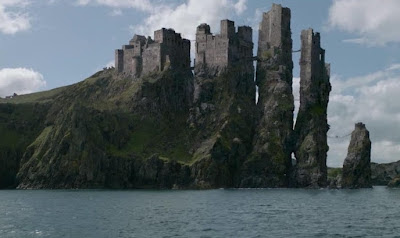 read my review of Episode 1, "the north remembers " - here.

i've often compared game of thrones to 'the wire' which is arguably the greatest show of all time. though both shows explored complicated social structures, the wire often focused on largely powerless characters who were affected by the real decision-makers. game of thrones, on the other hand, almost exclusively focuses on the power brokers, the kings and lords who determine the order of things. so when tyrion lannister tells his sister, queen regent cersei, that the people don't like her, the audience is left wondering, who are these people he's referring to? however, as season 2 progresses, we are being exposed to a more diverse world and although we may never see the world through the eyes of townsfolk, we are starting to the see that the westeros is more than just lannisters and starks.

all-in-all, it was another set-up episode, which is not surprising considering that the wire almost always took a few episodes each season to get into the swing of things. consider that we haven't even met up with renly baratheon yet.

the lannisters
no jamie or joffrey in this episode. tyrion inserted his man, bronn, as head of the city watch, after banishing lord janos slynt to the wall. and though he did banish janos to the wall in the book, bronn's character was never head of the city watch. like i said last week, they will be eliminating several minor characters and that was one of them. tyrion and cersei also engaged in some fine dialogue that displayed tyrion's usual smugness and cersei's obvious spitefulness for not being born a man.

the starks
no robb or catelyn. arya told gendry that she was a lady of house stark and had a nice chat with 3 not-so-nice prisoners on a wagon. well, 1 was nice.

jon snow is still at craster's keep and is not happy with what happens to the sons born of craster. at the end of the episode we see craster leave a baby boy out for the white walkers to take and presumably eat i would guess. we don't find out because jon gets knocked the fuck out by craster for spying on him. none of this was in the book and it seems like jon's journey will be slightly different than it was in the book which will be quite exciting for me to watch.

just to be clear, white walkers are the tall, blue-eyed creatures from the very first episode of season 1. the zombies or "wights" that attacked jon snow and lord mormont late in season 1 are not white walkers since they were once human. however, one can reasonably assume that wights and white walkers are related in some fashion.

the baratheons
no renly again. stannis has dutiful sex with his priestess melisandre with the hopes of having a son. he doesn't seem to really buy into this 'lord of light' business, which makes me question his integrity of sorts. that and getting into business with a pirate. i'm not sure how this is a higher road than cutting deal with 'thiefs' and 'traitors' as he calls robb stark, renley and joffrey. davos seaworth continues to be the most interesting character on the show this season. his eyebrow acting clearly expresses his doubt over stannis' chances but still his never-ending loyalty. i'd like to know the story behind him losing his fingers though. oh wait, i do know but can't wait till they go through it on the show.

the targaryens
no dragons. daenerys is in the middle of the dessert just like last week but with one less bloodrider. she's got a high level of confidence, that one. i'm rooting for her even if her father burned ned stark's father and older brother alive.

the greyjoys
i can finally start to add the greyjoys to the list of the families i will be recapping each week. it's not that big of a spoiler, if you saw the episode, to say that they will play a big part this season. theon's interactions with his father, balon, and sister, yara, were great. the iron islands, were pyke is located, is a very distinct culture in westeros. they are a hard people that are almost glorified pirates. if you recall, they rebelled against king robert some years ago and ned stark defeated them killing all of balon's sons except theon who ned took on as a ward. this was mentioned in season 1 and obviously balon still holds a grudge.

MISC.
lord petyr baelish and lord varys both had scenes in which we're led to believe that they still have an active role to play in who comes out on top in the game of thrones.

i'm still excited to see renly which i have to imagine will certainly come next week. it was awesome to see jon's direwolf, ghost, this episode. just to recap, there are still 5 direwolves alive. sansa's is dead. arya's was run off so we can't say for sure if she's alive or dead. jon, robb, bran and rickon (yes, the little stark boy that is never shown) all have their direwolves.

i loved loved loved loved seeing pyke in the opening credit sequence. it was possibly my favorite yet. and the castle in the show was sick as well. as i heard someone say last week, they should stop showing dothrak in the sequence because daenerys is in the red waste which is further out east.

as the season and show progresses i imagine that the showrunners, weiss and benioff, will try and explore some of the themes that are not as explicit in the books. gender roles and loyalty are two big ones that seem to be explored in this episode.

no hyperbole allowed rating: A-
the greyjoy scene and the incredible subtext in all the various conversations between characters really made up for the fact that we didn't have any action for the second episode in a row. i know it's coming so i have no problem being patient.
Posted by richmin3000 at Sunday, April 08, 2012