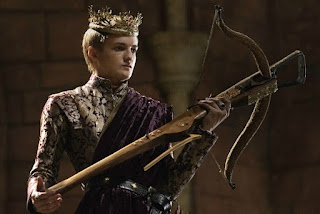 
it's been a fairly slow moving 2nd season thus far although i mostly feel as though they are flying through storylines as efficiently as possible. i think it mostly has to do with the large number of plot arcs that they need to continuously check in on each week.  a couple of new destinations were added in this episode (and in the opening sequence) so let's check in on our cast of characters this week...

the lannistersno jamie again this week which means that he hasn't appeared since the premiere. no cersei either for maybe the first episode ever. but we did get the triumphant return of lord tywin as we're introduced finally to the haunted castle of harrenhal. tywin mentioned at the end of last season that they would regroup there after jamie's defeat at the hands of robb stark. harrenhal is officially my favorite new opening sequence location overtaking the recently added pyke. anyway, tywin's arrival at harrenhal was fortunate for gendry who was about to get eaten alive by a rat. also, it seems arya will be his new cup bearer, whatever that means.

we also got a lot of joffrey and tyrion this week and the show's depiction of their power dynamic is incredible. first tyrion shows up joffrey by coming to sansa's rescue in the throne room. then tyrion makes a small gesture of good will (and an attempt to temper joffrey's hostile nature) by sending him, not one, but two ladies of the night. joffrey does what any hormonal teenage boy would do - he forces one of them to beat the other into a bloody pulp. i think we've sorted of figured out that this kid's got problems. still though, his message is loud and clear to tyrion - a king can do what he pleases (at least while he's the king).

the starks
no jon snow this week. no bran this week. arya experienced life as a captive of the lannisters - it wasn't pleasant. catelyn had a couple of great scenes. one with the baratheon brothers. and another with petyr baelish where she was brought back the bones of ned stark as a show of good faith by tyrion in the attempt to negotiate a trade of jamie for sansa/arya.

robb won another battle (though we did not see it happen as is the game of thrones way) against the lannisters which was meaningless really except to show off his dire wolf, introduce us to a pretty little nurse and give us a glimpse into the poor lives of common folk who are the real victims of this war.

the baratheons
stannis and renly finally meet on the field, but not in battle. they each expect the other to yield as renly has the bigger army but stannis has the better claim. neither does however which makes catelyn sad. stannis asks the onion knight, sir davos seaworth to bring his red priestess, melisandre to shore so she can give birth to a shadow demon. she names it stannis jr.

the targaryens
daenerys finally finds hope in the form of the greatest city that ever was and will be - namely qarth. the city is guarded by the 'thirteen' who are very protective over who they let into the city walls but are almost equally interested in dragons. i'm not sure why dany refuses to let them see the dragons in order to gain entrance since i assume they'll get a peak eventually but it did lead to a lot of talk of her dragons 'burning cities to the ground" so that was cool. one of the thirteen finally invokes a filibuster or something and dany is allowed into the city. i guess she won't have to burn them to the ground anymore. damn it!

MISC.
they opening sequence is starting to annoy me. last week they had dragonstone but no stannis. this week, no dragonstone but they had stannis (though he was no longer at dragonstone). they finally got rid of vaes dothrak and introduced qarth, but kept winterfell and the wall even though there was no bran or jon snow. i feel like they need to make this more consistent.

the title of this episode refers to the potential dangers lurking in the city of qarth. dany has dragaons but they are young and hungry... and priceless so i'd be worried.

i know everyone is wondering what the fuck to make out of that shadow demon, i mean stannis jr, but i fully expect it to be explained at the beginning of episode 5. i can't believe we're almost half way done. so much to get through!

no hyperbole allowed rating:  B+
the joffrey/tyrion scenes were amazing as they really aided in their respective character developments. robb too had a nice moment coming to the realization that he might not have it all figured out. i guess being a 18 year old king doesn't come with a handbook. my favorite storylines this season are 1) theon greyjoy, 2) jon snow, 3) brienne of tarth, 4) tyrion and 5) davos seaworth so it's sad to see 3 of those 5 not appear or have major roles.
Posted by richmin3000 at Monday, April 23, 2012