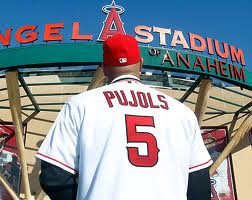 Curt Says:
It's hard to imagine, but I think people are underestimating the impact Albert Pujols will have on the Angels roster. The Rangers are damn good though, and I think this will be by far the best division race to watch. But Vegas has this all wrong. Take the under on Texas at 94 wins. Take the over on the Angels at 89.5. While I see a few places that the Rangers could improves (Felix in the rotation, Andrus gets better, Colby Lewis rebounds, two working hamstrings for Nelson Cruz), those improvements will be slight, and not enough to offset the decline from a lot of career years. Napoli, Harrison, and Michael Young won't be as good. Feliz will be replacing a pretty good year from Ogando. Yu Darvish will be good, but not as good as CJ Wilson was last year. And the rest of the roster had years above their mean expectation in 2011. I'm not saying they won't be good, but think low 90s, not high 90s.

The Angels on the other hand didn't have a career year anywhere in their lineup last year (with the possible exception of Erick Aybar), had black holes at C and LF, and finished near the top of the league in blown saves from their bullpen. Since then, they've replaced Mark Trumbo and his .291 OBP with the best hitter in baseball, they've replaced Joel Pineiro and his 5+ ERA with CJ Wilson, they've replaced Bobby Abreu and his mediocrity with Kendry Morales, and they've replaced the combined .189/.249/.296 "hitting" from Angels catchers in 2011 with Chris Ianetta. You can expect nothing worse from Vernon Wells in 2012, and if not, oh well Mike Trout is on the scene. All that with a slight improvement at a number of other positions (2B, CF, RF, RP) and the Angels are looking like the team to beat. It's funny they're not getting more press after signing the best available offensive and defensive free agent this offseason, but there you have it.

By the way, could there be a worse way to open the MLB season? Seattle vs Oakland in Japan at 3AM EST. I mean really, MLB? Seattle and Oakland are pretty rough looking squads, but Seattle has King Felix so they'll avoid the cellar.
Rich Says:
curt and i agree that both the rangers and angels are good, but as you can tell in my previews of the al east and central divisions i like to give the edge to organizational intelligence. curt criticized the sub .600 ops from angels catchers last year but that was an organizational decision, in part, to play more of jeff mathis and less of hank conger. they helped the toronto blue jays with their rebuilding efforts by taking vernon wells off their hands and then actually played him. this year, arguably the best prospect in baseball, mike trout, and possibly the 2nd best position player currently available to the angels (after pujols) will spend the beginning of the season in the minors, which will most likely cost the angels a win over the course of the season. i expect weaver/haren/wilson to all have worse seasons in 2012 than in 2011 as well. pujols had his worst season ever in 2011 and although i expect a big season from him in 2012, he's not the same player he was a few years ago.

the rangers, on the other hand, signed the best pitcher this offseason (though not a free agent technically) in yu darvish, the half persian, half japanese pitching sensation to replace the loss of wilson. derek holland will finally reach his potential and lewis/harrison/feliz will round out a solid, if not spectacular rotation. with ogando moving back to the bullpen, he will add to an already deep bullpen. the true strength of this team is, however, their superior offense. by my estimation, they are as good or clearly better at every offensive position over the angels, except at 1b (pujols over moreland). plus the rangers still have a great minor league system to fill out any holes during the season and a smart front office that will react accordingly.

though neither the mariners nor the a's will compete, i like both organizations. after the mariners made a phenomenal trade to get jesus montero from the yankees for overrated michael pineda, they are poised to compete in 2014 or so with a core group of ackley, montero and smoak with king felix and a great crop of pitching prospects waiting to make an impression. and although the a's seemingly are always in rebuilding mode, they are never as bad as they seem at first glimpse.

*Curt was a guest on Episode 11 of the No Hyperbole Allowed podcast with Rich and Colin, which you can listen to here.
Posted by richmin3000 at Sunday, April 01, 2012