Your humble podcast hosts welcome to the studio (several personal computers hooked up via Skype) James Norton, an Englishman's Englishman, hailing from England. He regales us with stories of traveling in this strange land where people pronounce their r's. How the British perceive American politics. The differences between New York and Miami. What it's like to finally visit the dentist. Etc.

We also discuss Ozzie Guillen (pronounced Gee-Shen if you're a silly Argentine) and his comments professing his man-love for the Beard (no, not Brian Wilson, the other one). Colin is 1/256th Cuban so be forewarned that he is permitted to poke fun at latin accents - it's in the racists' handbook, 5th edition, Chapter 8 entitled "How to Make Fun of Accents and Get Away With It Too!!"

This is the "Afghan polo" that Colin was talking about. It's called buzkashi. Or kok-boru. Or oglak tartis. Or ulak tartysh. Seriously. Those are all names for this crazy sport - 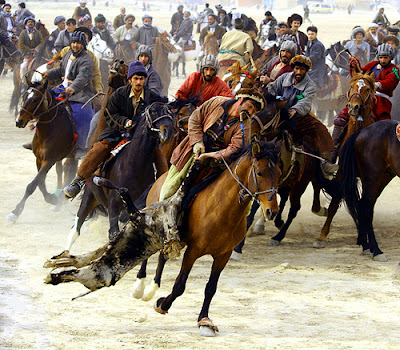