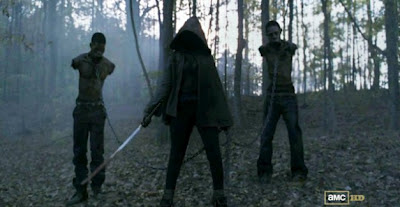 *spoiler alert
* the walking dead is now the no.1 basic cable drama in tv history for men 18-34. over 9 million viewers tuned in last night for the 2nd season finale making it the most watched episode of tv in amc history as well, on a network that carries arguably the two highest rated shows on tv currently (mad men and breaking bad).

back in december, i reviewed the fall season of the walking dead season 2 (read here). in that review, i discussed the inevitable splintering of the group into two major factions. one faction desired normalcy, empathy and a "civilized" existence believing that life itself was meaningless without those qualities. the other faction believed it came down to survival and a "kill or be killed" mentality during a zombie apocalypse. when a non-zombie survivor is captured, the question came down to whether or not he should be killed because he was a potential, albeit unlikely, threat to the group's survival.

in disposing of both dale and shane, the show has placed the entire burden on rick to be the moral compass for both the viewers and the group itself. previously, he was able to point the finger at either dale or shane, or both, and play the mediator, the good guy. well, as anyone who saw the season finale last nite can attest, rick doesn't seem to be playing the good guy anymore. throw in the fact that their home for the entire 2nd season just went up in flames after a zombie herd attack and rick is in no mood for any backseat drivers in this group anymore. it's time for the ricktatorship to begin!

since rick won't be starting his reign until season 3, this is a good time to discuss whether people should invest their time into this show. although season 1 wasn't great, it had its moments. and although season 2 wasn't great, it had even more great and fun moments. and that's all this show really is; a show that frequently has great moments and occasionally has a great episode (like the penultimate episode last week).

the acting isn't particularly strong. the writing isn't particularly strong. but there are zombies and you can bank of seeing a few die each episode. sometimes character choices make you cringe because they're way too unrealistic, but the show does a very good job invoking a sense of dread (especially when there is a host of zombies on the horizon) and creating tension.

i think the show's biggest weakness is one of stagnation. i understand the show wanted to establish a group dynamic so that dynamic could be frayed and repaired along the way, but the 2nd season suffered too long by keeping the group on the farm. the dynamics in the group are best explored through external forces requiring tough choices (like whether to kill an innocent man) and those external forces were too few and far between this season.

now that they are off the farm, i'm ever hopeful that they will be on the run for awhile. it would be wise to split the group apart (like i hoped after the zombie herd attack) because then we could get multiple storylines with various characters getting lead roles. too often have supporting characters gotten lost for multiple episode arcs. eventually you could always get the group back together but by separating the group, you can create some tension and throw half the group into action while the other half can deal with more of those boring questions of morality.

hopefully with andrea now separated from the group and being saved by michonne (picture above), we will start to see at least one parallel storyline running in the next season. the final shot of the prison in the distance will hopefully only serve as a short term adventure rather than the location for all of season 3, unless of course, it turns out to be crazy fun. and prisons generally seem better suited for zombie attacks than a farm.

michonne, for those that didn't read the comics (and i have not) is apparently one of the most popular characters in the comics and should add a new twist to the show. aside from the fact that this is a show about zombies, they have tried to make it as realistic (read: boring and slow) as real life is. well, michonne doesn't look like anybody i'd ever run across in real life and i live in new york city, home of high fashion (like this) and the hipster. so my expectation next year is that michonne is a blend of blade (yes, wesley snipes' blade) meets aeon flux (not the charlize theron film version but the mtv's liquid tv version).