Preview: Return of the Best and Worst Show on TV 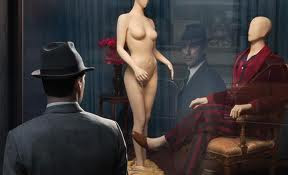 it's been 17 months since mad men season 4 finale. on sunday, the best show on television (winner of the emmy for best drama for each of its 4 seasons) will make its triumphant return with a two hour season premiere. the long hiatus resulting from a contract battle between creator matthew weiner and amc ended with the show being extended for 3 more seasons before its final conclusion.

the prolonged and public negotiations seemed to have ramifications for all of amc's original programming. reportedly, breaking bad and the walking dead had their budgets cut after amc was forced to throw bags of cash at weiner. amc also stalled development on other new shows, not that it matters. amc currently has 4 widely discussed and intensely scrutinized dramas in mad men, breaking bad, the walking dead and the killing.

mad men, as stated will be around for 3 more years. breaking bad has 16 episodes left (to start airing again july 2012). the walking dead is the most popular cable drama on tv. and then there's the killing which, you know, exists. so, as it stands right now, amc certainly is not scouring the waiver wire, as it were, for replacement shows.

we left don, peggy, pete and joan back in 1965 at the conclusion of season 4 but where we pick up again no one knows. don spent much of season 4 in a personal and professional malaise, trying to come to grips with losing the only person who ever knew him, as he put it, in the widely celebrated 'suitcase' episode. with the firm of 'sterling cooper draper price' struggling along (not helped by don's erratic behavior), don decides by season's end to take control of his life by publicly renouncing tobacco companies and proposing to his secretary (which to me continues the juxtaposition of don as a predator in the professional realm and a victim in the personal). mad men, unlike breaking bad for instance, is not a show about change (be it growth, moral decay as the show progresses) but one about self-reflection as the world around you constantly challenges your beliefs and assumptions. don, struggles through season 4 wallowing in self-pity and identity crisis only to emerge at the end perhaps as a more resolved version of his former self.

on april 1st, amc will premiere season 2 of the killing which will partner with mad men throughout the months of april and may. in this regard, amc has chosen to pair the best and worst show on tv, which if i had any plans to watch season 2 of the killing i would protest loudly. amc, wisely, is attempting to mitigate the almost universal hatred over the killing season 1 finale by pairing it with the critical darling that is mad men. i, for one, will not be suckered into watching any more killing but if this results in some better ratings for mad men then i can live with the arrangement.

we left off with the murder of rosie larsen still not being resolved. after a multitude of red herrings and dumb plot twists, we were left hanging at season's end for seemingly no reason. i feel like every frustrating aspet of 'lost' is on full display with none of the great characters or cool moments. and to top it all off, showrunner veena sud just can't be trusted.

*colin and i will be discussing mad men on future podcsts
Posted by richmin3000 at Friday, March 23, 2012