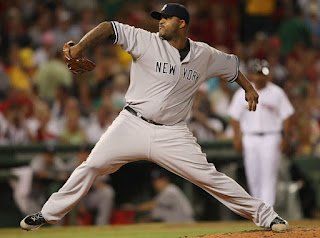 by richmin3000 and Curtis Warrington *.

curt and i will be previewing the upcoming baseball season over the next 7 days, as we make our predictions for each division, playoffs and awards. although the mariners and a's have played 2 games in japan, the "real" season doesn't start until next week so make sure you check out our analysis to see how your favorite teams will fare this year.

today, we start off with the best division in baseball.

Curt Says:
Betting against the Yankees is always a profitable move. Does this strike you as a team the will get better? Adding Pineida and Kuroda will help, but they are replacing pretty good (yet unsustainable) production from Garcia and Colon. So while they are much more talented in the rotation, it might not affect the standings much. On the offensive side they are still as dangerous as ever, but I dont see where any improvement comes from. They're pretty much the same team except a year older. That said, they're still really effin good. Dont pay too much attention to the order of the top three above, I think the Yankees, Red Sox, and Rays will all win 90-95 games. Confidently take the over on both Boston and Tampa Bay, currently at 87.5 wins in Vegas. Take the under on the Yankees at 93 wins. I like em to win 93, but things could end up going poorly for them this year. And watch out for Toronto, they're building something strong up north.

Rich Says:
i agree with curt in that any of the top 3 teams can win this division with a very outside shot for toronto. so when trying to pick one team to win you have to think about resources, both financial and minor league players. in this regard, the yankees have the edge. they have the financial resources to make any trade and some quality arms in the minor leagues with banuelos and betances in the event they need to supplement the talent on the major league roster. the red sox, on the other hand, have significantly weakened their minor league system after trading for adrian gonzalez while tampa bay just can't afford to take on huge salary like the yanks and sox.

i don't see any of these teams winning 95 games as the yankees' improvements on the pitching side will be cancelled out by an aging offense. the red sox need to overcome last year's historic collapse while depending heavily on either comeback seasons from crawford, buchholz and youkilis or hoping that better-than-expected seasons from elsbury, ortiz and beckett were no fluke. the rays, though limited by their resources, have the best manager in the game (joe maddon), a great rotation (shields, price, moore) and should get a huge bounce back year from evan longoria. in what should be a very close race, i'll put my money on the evil empire, in what could be mariano rivera's final season.


*Curt was a guest on Episode 11 of the No Hyperbole Allowed podcast with Rich and Colin, which you can listen to here.
Posted by richmin3000 at Friday, March 30, 2012