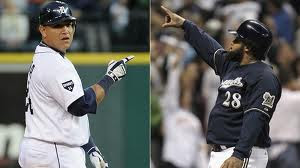 Curt Says:
Like last year, Detroit should run away with this division. But there's a chance they win the division yet win fewer games than any other playoff team. Their defense is going to be scary bad. Cleveland and Kansas City are probably .500 teams in 9/10 of the best case scenarios but you could squint really hard and see playoffs teams there. Kansas City might be a trendy pick, but they have holes on offense and a terrible pitching staff. I think people are underestimating how bad Chicago could be. I would like to emphasize they word "could" though. They also could be quite good, and I like their odds for the playoffs more than KC or Cleveland even though I think they'll probably finish lower in the standings. They don't have to do much to be better than last year, and last year they won 79 games. They had black holes at 2B (Beckham should be better), 3B (Morel should improve), RF and DH (Rios and Dunn couldn't be worse, if Rios sucks again, at least Fukodome can get on base). They got down years from Danks and Floyd in 2011 and could see an improvement there. Chris Sale could outperform anything they lost when Buehrle signed with Miami. Plus, I really like Dayan Viciedo to surprise people and hit 25 bombs. So it's not out of the question that the White Sox will be in the running all year.
Rich Says:
detroit wins this division by default. it's not that they are a bad team but it's more so that no one else in this division is very good. detroit won the division last year after justin verlander won both the cy young and mvp awards and then added prince fielder which should help. but they also lost victor martinez for the season and can expect some regression from doug fister. they are a very top heavy team with a terrible defense so a big injury could bring them back to the pack.
after the tigers, the order is somewhat arbitrary as every other team has some upside but plenty of holes. the twins should get better with a healthy mauer/morneau. the indians have a solid team with a good rotation. i like the royals because of their upside. a lot of their young players didn't live up to expectations last year (moustakas, duffy) but everyone should be better this year especially eric hosmer, who will be an mvp candidate as soon as 2013. the white sox are in limbo - selling off a couple of good contributors (quentin, santos) without going into full rebuilding mode. they have probably the worst minor league system so there's very little hope on the horizon. sure, they have some talent on the roster and there is literally no way adam dunn could be worse than he was last year (when he almost broke the record for lowest batting average in mlb history), but i have no faith in the organization.


*Curt was a guest on Episode 11 of the No Hyperbole Allowed podcast with Rich and Colin, which you can listen to here.
Posted by richmin3000 at Saturday, March 31, 2012