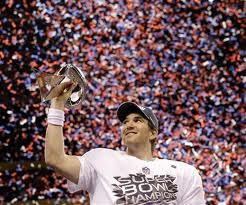 thank you eli. that was fun. same time next year?

as i wrote in my 2011 giants seasons retrospective, this was eli's season. his development and success was incredible to watch this year and the fact that it culminated in another superbowl win is almost like icing on the cake (a lot of icing). bill barnwell on grantland did a good job dissecting the differences between eli manning in the '08 superbowl and last nite's. they can easily be highlighted by the play-of-the-game in each superbowl. in 2008, david tyree had a miraculous catch that some (including colin) would call lucky. in 2012, mario manningham caught a ball that was the result of a perfect throw and catch. no luck involved. just precise execution.

with eli's maturation, i prefer to focus on how this win affects eli's standing among the quarterback elites in the nfl. i acknowledge, first and foremost, that i can not say with a straight face that eli is the best qb in the league, but an objective argument can certainly be made that his resume stacks up against anyone else's. i make such an argument in the following one-on-one comparisons:

in the 2004 draft, the new york giants essentially traded philip rivers, linebacker shawne merriman and kicker nate kaeding to the san diego chargers for eli manning. a couple of years later, as rivers was putting up big numbers, merriman was considered one of the best defensive players and kaeding a great kicker, this trade looked like a steal for the chargers.

merriman is now almost out of the league and rivers just had one of his worst seasons. oh, and eli just won his 2nd superbowl. rivers has had a very good career thus far but has failed to reach the superbowl even though he's been surrounded by a lot of talent over the years. and with eli coming off his best statistical regular season, he's pretty much bettered rivers by any measure.

in the 2004 draft, eli was selected 1st, rivers 4th and "big ben" 11th by the pittsburgh steelers. it's no wonder then that all three have been compared to each other over the years. and early on, it was big ben who was having all the success. in his 2nd year, he won his first superbowl and then followed that up with another superbowl win 3 years later. while rivers was getting all the regular season stats, big ben and later eli, were getting all the hardware.

big ben now has made 3 superbowl trips, 2 rings, and 1 superbowl mvp. eli, however, has him beat in regular season passing yards and touchdowns. and though he has only made it to 2 superbowls, he also has 2 wins AND 2 superbowl mvps.

assuming peyton doesn't retire, it'll be next to impossible for eli's regular season career to ever live up to his older brother's. peyton is on pace to break all of the nfl's most important passing numbers.

but for all of peyton's successes, his biggest weakness has always been his performance in big games. his biggest foil? the new england patriots. so now that eli has twice defeated his brother's arch-nemesis, where does the pecking order now stand? well, eli in the process has become one of the most "clutch" quarterbacks of all-time, breaking the nfl records for most 4th quarter touchdowns in a season (15) and most road playoff victories (5), statistics that highlight eli's dominance over his brother's when it counts most.

eli also now has 2 superbowl wins and mvps, doubling his brother's total. peyton may have his little brother in the statistics, but eli has him with the rings and i bet that at the family dinner table, that will mean more.

like peyton manning, brees and rodgers have had both personal and team success, winning player-of-the-year awards, one superbowl ring and one superbowl mvp as well. still though, with all their personal success, two > one and eli is on the right (left) side of that equation.

if you've noticed a trend here so far, it's that i am using eli's 2 superbowl wins to highlight the differences between him and the other qbs. and when it comes to big ben, the only other qb with 2 superbowl wins, eli has had the advantage in regular season statistics.

but there's one quarterback with whom that argument will not work and that's tom brady. a 2-time mvp winner, a 3-time superbowl winner, a 2-time superbowl mvp, a 5-time superbowl participant and holder of a multitude of nfl records, brady's resume surpasses them all in almost every respect, except 1.