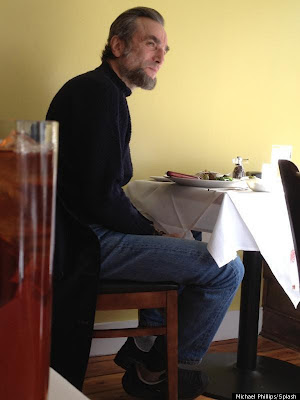 by richmin3000
with new films by such directing greats as steven spielberg, ridley scott, christopher nolan, peter jackson, baz luhrman, quentin tarantino, paul thomas anderson, wes anderson, ang lee, alfonso cuaron, tim burton and terrence malick, 2012 seems like it will be a much better year in film than 2011. of course, there will be a lot of disappointments and surprises but the following are my 10 most anticipated movies of 2012:
10. the avengers (release: May 4; dir: joss whedon; starring: robert downey jr.)
marvel has been planning this film for years, getting audiences familiar with the famous comic book characters with films such as, iron man, thor, hulk and captain america. joss whedon is a fan boy's dream (buffy the vampire slayer, firefly) to direct this film but he will have a tall task in front of him to create an interesting story with so many moving parts. luckily for him, there won't be any need for any real set up since each superhero's emergence was dealt with in their own films. it's always fun to see robert downey jr. play iron man so that alone should make the film entertaining even if it falls short of the lofty expectations.
9. the great gatsby (release: Dec 25; dir: baz luhrmann; starring: leonardo dicaprio, carey mulligan)
luhrmann, famous for the dicaprio's romeo and juliet and moulin rouge, takes on this american classic by f. scott fitzgerald, who is incidentally my favorite author. i didn't see his last film, australia, which got mixed reviews at best but i'm hopeful with this one.
8. prometheus (release: June 8; dir: ridley scott; starring: michael fassbender, charlize theron)
scott's films are always exciting and tense, even if they are not always great. prometheus is a sci-fi action film that promises to deliver a lot of tension and difficult situations that the characters must struggle with. scott has had some huge hits with alien, blade runner, black hawk down and gladiator and some misses as with hannibal. this was originally thought to be an alien-prequel so expect that those types of thrills.
7. django unchained (release: Dec 25; dir: quentin tarantino; starring: jaime foxx, leonardo dicaprio, sacha baron cohen, samuel l. jackson)
django is a former slave set out to rescue his wife from a plantation owner. i expect a rom-com with some subtle social critique mixed in. or perhaps it'll just be classic tarantino with lots of sharp dialogue and sharp weaopns.
6. the master (release: 2012; dir: paul thomas anderson; starring: joaquin phoenix; philip seymour hoffman, amy adams)
phoenix makes his triumphant return to the screen after his brief and perhaps fake rap career. pta makes his first film since 2007's there will be blood. considered by some to be the best filmmaker working today, the master will certainly be dissected by every film critic and should be an instant oscar contender. the story is said to be based on l. ron hubbard and the growth of scientology so maybe the hollywood (i.e. scientology) crowd will ban it from next year's oscars after all.
5. gravity (release: Nov. 21; dir: alfonso cuaron; starring: george clooney)
a sci-fi thriller about a lone survivor in space struggling to find his way back home. with y tu mama tambien, the 3rd harry potter film and children of men, cuaron has made his mark as a versatile and incredibly fascinating filmmaker. children of men is one of the best directed films i've ever seen and i'm very excited to this follow-up.
4. the dictator (release: May 11; dir: larry charles; starring: sacha baron cohen)
after the success of borat and the disappointment of bruno, cohen embarks on another potentially hilarious journey as a man who would become dictator and enemy to the west.
3. the hobbit: an unexpected journey (release: Dec. 14; dir: peter jackson; starring: hobbits)
based on the hobbit, peter jackson splits the single book into 2 movies to be released in back to back years. he will stray from the book a bit and add in some backstory found in the lord of the rings trilogy and other material. this should be good for audiences as some of our most beloved characters from the lord of the rings, such as frodo, will return in these films.
2. lincoln (release: December; dir: steven spielberg; starring: daniel day lewis)
based on doris kearns goodwin's book 'team of rivals' this oscar-bait film will certainly be considered for at least best picture, best director and best actor for the best actor in the world, daniel day lewis, who took home the honor after his brilliant turn in there will be blood. in 2013, he will play a priest in martin scorsese's next film, silence. but now, he plays hero to the north, abraham lincoln, a role he will simply be fantastic in.
1. the dark knight rises (release: July 12; dir: christopher nolan; starring: christian bale)
in the third and final installment of nolan's incredible batman franchise, the dark knight returns to gotham to defend the city from its new enemy, bane played by tom hardy. nolan, the director of memento, the prestige and inception, will turn his sights (as producer and writer) towards 2013's superman reboot so for those of us who loved his take on batman should be excited for a run of great superman films to follow.