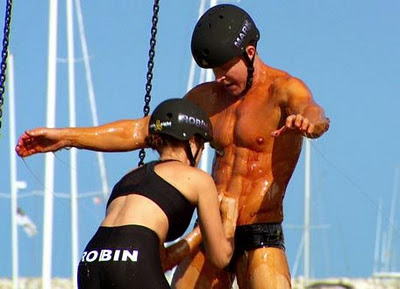 What makes the challenge the most indispensible MTV produced show of all time? A simple formula of familiarity, competition, desperation and alcohol buoyed by a mesmerizing series of rules both written and unwritten has taken the once modest Real World-spinoff into a powerhouse franchise which far surpasses the intrigue of its original source. The debut season, airing in 1999, was a simple battle of cast members from MTV's biggest hit at the time, the Real World (in its 10th season), against its little brother, the far less beloved, RV-centric Road Rules. The competition featured a Roller Derby and several challenges involving bungee cords.
While not much has changed with respect to the basic components of the show, the death of Road Rules in 2002 forced MTV pioneers Bunim and Murray to get creative. And now in 2012 we have Battles of the Exes, which is in no way related to Battle of the Sexes (2003), Battle of the Seasons (2002), or The Island (late 2008), but may be more similar to past efforts such as The Gauntlet (2004), The Gauntlet II (2006) and The Gauntlet III (early 2008). Yes these are variations on many of the same themes (The Duel!, The Duel 2!), but there have been occasional flashes of creative genius (Fresh Meat and Fresh Meat II). This season finds our beloved crack creative staff up to their best tricks - they have decided to pair players into teams of two, the catch being that each team of partners will have a romantic history on a Real World, Road Rules or previous Challenge season which turned sour. Annnnnnd scene.
So after this week's premiere episode, we are left with many more questions than answers. I will ask several of them below in anticipation of the debut of my 2012 Battle of the Exes Power Rankings to appear each Thursday in this very blogumn. Do I recognize these questions are rhetorical? Yes. Yes I do. But that doesn't prevent me from begging for comments. (Please comment. I'm lonely and sad. Oh, you will??? Thanks, Mom.)
1) Who was MTV's dream ex couple to get on the show? Mutliple good choices for Wes, including former fiancee Johanna from Real World Austin, but producers struck out with his Fresh Meat pseudo hook up Mandy. But they still got Wes, which I'm sure is good enough for them. My guess is everyone's favorite MTV love story Danny and Melinda. You remember them - the Boston tough guy who got his entire face caved in and the blonde Oregonian hippie who married shortly after their season. Yea, they're divorced. I'd love to see this relationship play out all over again after a long nite boozing with the roomies or a long day summer saulting over a fiery pit.

2) Is taking steroids a pre-requisite for Challenge team certification. Mark Long is damn near 50 years old. Jesus man. This guy is more ripped than a fitness model hawking a Shake Weight (see photo above). Oh, you did P90X? Thats what they're calling it these days?

3) How and why did that ripped senior citizen Mark ever hook up with that shlep Robin? Good grief. She is one more televised sloppy incident away from the glue factory.

4) Regardless of amount of steroids his adversaries have ingested, is CT beatable without having to rely on a partner? No. Great question, Adam.

5) Who looked the most jealous upon seeing their ex? I would say Diem, if she didn't simultaneously have the biggest face of fear of all time. Possibly Aneesa, whose lesbian rage seemed to boil over the last time she saw Rachel. Was that in the Ruins, the Gauntlet III or the Inferno II? Tough to keep track.

Email ThisBlogThis!Share to TwitterShare to FacebookShare to Pinterest
Labels: review, television, the challenge