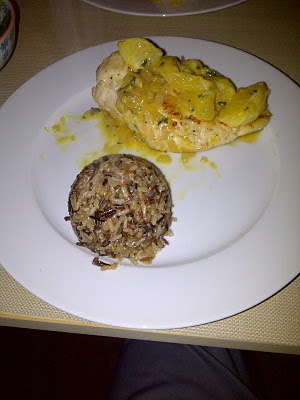 don't worry - this is not gonna turn into my version of "julie & julia".

figuring i needed to stay ahead of my new year's resolutions, i took a big step towards accomplishing resolutions #7 and #8 last nite. i've posted a link below to the recipe i followed and the photo (to the left) is of my results.

**i made some changes to the recipe due to personal tastes and available ingredients. a) i used straight chicken breast; b) i used rum instead of brandy/cognac; c) i used long grain wild brown rice; d) and i had some help so can't take all the credit!**

the recipe is taken from the february 2009 issue of fine cooking and was originally posted by keith law on his blog, meadow party.

*Yes, your butcher can split this for you, but if you own a chef’s knife, just flip the whole breast over and do it yourself to save a few dimes.

1. Combine 1 cup orange juice, 1 cup water, and salt, stirring until dissolved. (You can also heat 1/2 cup of water, dissolve the salt in it, then cool it down with ice to end up with a cup of water.) Place the chicken breasts in the brine for one to two hours.

2. Preheat the oven to 400 degrees. Remove the chicken breasts from the brine and pat dry. Season with salt and black pepper. In an oven-safe skillet or saute pan, heat about 1 Tbsp olive oil until hot but not smoking, and sear the chicken, skin side down, until well browned, 4-5 minutes. Flip and sear on the second side until lightly browned, 2-3 minutes. Place entire skillet in the oven and roast until 160 degrees in the center, 15-20 minutes.

5. Turn off the heat and add the parsley, 1 Tbsp butter, and orange segments, swirling to mount the butter in the sauce. Season to taste with salt and pepper. Serve sauce over sliced chicken.