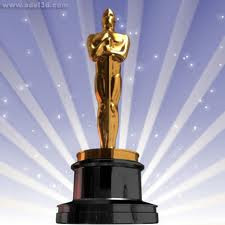 what a great day! this morning i woke up and the first thing i read were the 2012 oscar nominations. then tonite i'll go to bed listening to a bunch of political "pundits" dissect the state of the union address. but before colin and i engage in our own political punditry on tomorrow night's podcast, let me give my initial reaction to the oscar nominations.

between 5 and 10 movies can be nominated for best picture... and in a very weak year in film, 9 movies were given the honor of a nomination. the early front runner is easily 'the artist' which took home the honor at the golden globes (for musical/comedy). the big surprise was 'extremely loud & incredibly close' which is getting very mixed (at best) reviews. i've only seen 3 of the films thus far (will be seeing the artist this weekend and war horse next week) and 'tree of life' is by far the best film of the trio though it's far more beloved by critics than by the masses. 'hugo' is certainly a favorite of film geeks (as is the artist) while 'moneyball' (based on one of my favorite books of all time) is one of the most overrated movies of the year (could have been great if steven soderbergh didn't leave the project). also, 'drive' should have been nominated. predicted winner: the artist

my favorite surprise of the nominations was gary oldman being nominated for best actor in a leading role for 'tinker tailor soldier spy'. he's probably my favorite actor of all time and this is his first nomination ever. predicted winner: george clooney

rooney mara for best actress in a leading role? really? people realize that the original swedish film was much better than the david fincher version right? she was fine i guess, but not deserving of this nomination. predicted winner: michelle williams

the best actor in a supporting role was probably the most interesting category. albert brooks for 'drive' did not garner a nomination even though he's been winning award after award over the last several weeks. i actually don't think he was that great though i recognize that people love actors who play roles out of character (see denzel washington in training day). jonah hill, however, got his much anticipated nomination as peter brand (aka paul depodesta of the new york mets) in 'moneyball'. alas, like the movie itself, i have no idea why he was nominated. nick nolte also got a nomination for his work in 'warrior' which i just saw recently and loved. he was really good in that film, which will appear on my revised top ten of 2011 list right before the oscars are televised on february 26th. predicted winner: christopher plummer

finally, the strongest category this year is in directing. i'm surprised that steven spielberg has not gotten the love for 'war horse' that i would normally expect. moreover, his other film, 'the adventures of tin tin' did not get nominated for best animated feature film. i'm not a big fan of his so it doesn't bother me - more just surprised is all. anyway, this year features 4 very strong candidates in woody allen ('midnight in paris'), martin scorsese ('hugo'), alexander payne ('the descendants') and terrence malick ('tree of life') with michael hazanavicius ('the artist') rounding out the five. it's a shame that nicolas winding refn was not nominated for 'drive'. i can understand why it's not nominated for best picture but he did a wonderful job choreographing that film. my personal choice for this category is terrence malick, who is considered something of a recluse. he was also nominated in this category in 1998 for his film, 'the thin red line'. i'd love to see him accept this award because he's notorious for not granting interviews or discussing his films. it's not surprising, however, because i imagine, just like his films, no one would understand what he was talking about. this is probably my upset pick of the year... i just have a feeling that the artist will take home best picture while malick will take home best director as sort of a consolation prize. predicted winner: terrence malick

if you want to see a complete list of nominations, go here. otherwise, i will write a more detailed oscar preview as it gets close to february 26th and also a revised top ten movies of 2011 list. in addition, i plan on writing a career retrospective of gary oldman which i am very much looking forward to.
Posted by richmin3000 at Tuesday, January 24, 2012