Reaction: Chris Paul to be a Knick? 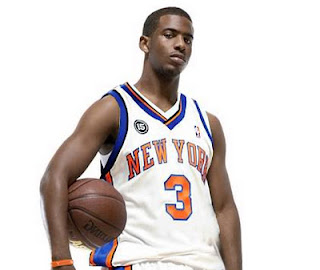 yahoo sports is reporting that chris paul's agent has told the hornets that paul will not be signing a long-term deal with them and wants to be traded to the knicks. a potential free-agent at year's end, the rumors that paul wanted to join amare stoudemire and carmelo anthony in new york have been ever-present since last year. when carmelo got married last july in new york city, chris paul toasted that the three of them would form their own "big-3" (a reference to kevin garnett/paul pierce/ray allen in boston and more recently, lebron james/dwayne wade/chris bosh in miami) in new york.

well, it seems as though his wish is still alive and well. chris paul is one of my favorite players, if not my favorite player, in the nba and he's been #1 on my dream list for some time now. so please excuse me if i'm way too excited over a rumor, but sometimes dreams do come true.
Posted by richmin3000 at Thursday, December 01, 2011