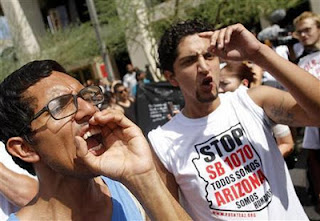 it's going to be an interesting and influential 2012 for the united states supreme court. having already agreed to hear a constitutional challenge regarding healthcare reform, the supreme court today has announced that it will decide whether to uphold certain provisions of arizona's controversial immigration law, entitled 'support our law enforcement and safe neighborhoods act' or 'arizona sb 1070'.

the united states justice department's legal challenge of arizona sb 1070 is the first of many to run the federal court gamut necessary to reach the supreme court. governor brewer signed into law arizona sb 1070 in april, 2010; on july 6, 2010, the justice dept filed a motion for preliminary injunction which was granted in part on july 28, 2010 by the united states district court for the district of arizona. the united states court of appeals for the ninth circuit heard oral arguments on november 1, 2010 and rendered a decision on april 11, 2011, affirming the lower court's decision.

**a quick federal court primer: there are 3 levels of federal courts - the district court, court of appeals and the supreme court. the district courts are the trial courts (with 1 judge per case) and there are 89 districts in the united states. the circuit court of appeals is the first level of appellate courts (3 judges hear your appeal) and there are 13 circuits. finally, we have the supreme court and there is only 1 of those with 9 justices (not judges) who sit in on every case (unless recused).**

as with the challenge to the healthcare reform laws, we will continue to monitor the developments in this case and we will offer some new insights into the legal arguments on both sides. one of the more interesting aspects of this case is the attorney arguing on behalf of arizona, mr. paul d. clement, a bona fide superstar in the legal world. as solicitor-general under president bush, he argued on behalf of the united states in some of the more controversial cases before the supreme court (think guantanamo, torture, enemy combatants). he is also the attorney handling the legal challenge to health care reform also before the supreme court. and just for fun, he also was one of the lawyers advising the nfl and nba during their most recent labor disputes earlier this year. he's on a short list of potential republican nominees to the supreme court and he used to clerk for justice scalia back in the day. it's not a bad resume (objectively speaking that is).
Posted by richmin3000 at Monday, December 12, 2011