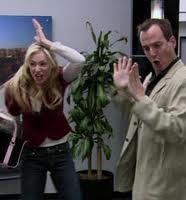 after increasing their subscription prices and attempting to siphon off dvd delivery from streaming, netflix has finally done something positive worth mentioning... bringing us new episodes of arrested development.

off the air since 2006, arrested development fans have continued to clamor for their return. rumors were rampant during their third and final season that they would be heading to hbo or showtime...
Michael: So, what's going on with the fundraiser?
George Sr.: Well, I don't think the Home Builders Organization is gonna be supporting us.
Michael: Yeah, the HBO's not gonna want us. What do we do now?
George Sr.: Well, I think it's "Show Time." I think we have to have a show during dinner.
(season 3, episode 8, entitled "S.O.B.'s" as michael bluth and his father, george sr. try to figure out how they are going to raise money to save the family (or the show)).

now, variety is reporting that the highly anticipated fourth season of arrested development will begin airing on netflix in early 2013. with mitch hurwitz's announcement that an arrested development movie is still in the works, this news couldn't have come at a better time for both fans of the show and netflix inc., which has seen its stock plummet this year.

for anyone who hasn't seen the show, i highly recommend it. as easily as i can say that "the wire" is the greatest drama series of all-time, i can easily say that "arrested development" is the greatest sitcom of all-time. and since you have about 18 months until the next season airs, you'll have plenty of time to catch up!
Posted by richmin3000 at Friday, November 18, 2011

Email ThisBlogThis!Share to TwitterShare to FacebookShare to Pinterest
Labels: television